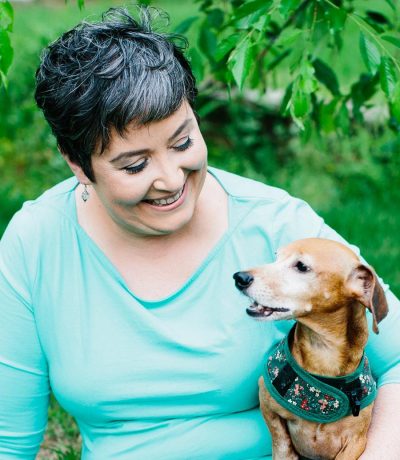 Kristin began volunteering with dachshund rescue in 2002. Before that time, she had been intrigued by pictures of IVDD dachshunds in their wheelie carts and was curious about what it would take to care for a dog with disabilities.

In 2004, Kristin agreed to foster a “down” dachshund whose family could not provide medical care. She met the little dog’s owners in the parking lot of an outlet mall, where they handed over a reeking bundle wrapped in pee pads and duct tape. The dog inside could barely lift her head, but she did make eye contact. The family told Kristin that eight days before, their vet had sent them home with prednisone and no other instructions. This meant that Tabby, as Kristin named her, had not emptied her bladder for eight days. The pee pads were soaked with stale overflow urine, feces, and blood from the intestinal ulcerations caused by the steroid.

Tabby and Kristin learned together, and Kristin found that she loved working with these dogs. Over the next few years, as she fostered other IVDD dogs (we stopped counting after seven), she became the “go-to” person at DREAM Dachshund Rescue who made surgery and crate rest decisions for IVDD foster dogs, took them to rehab, and coached people who contacted DREAM for help with their own dogs. In 2007, one of Kristin’s other dachshunds, Jack, became paralyzed from IVDD. His surgery was unsuccessful, but he lived another six years and even hunted critters successfully in the backyard after his injury. Since then, Kristin has fostered many other dogs with IVDD and adopted a second paraplegic dachshund, Paris. Kristin has coached hundreds of people in person and virtually on caring for dachshunds with IVDD.

Kristin lives in Atlanta, Georgia, with her husband Craig. Their family experiences firsthand the full and joyous life possible for a paraplegic dachshund. Tabby lived to be 17 and loved to sleep tucked under Kristin’s arm.